Whether you’re more into Xenakis or Arca, granular synthesis has helped a plethora of artists express themselves in unconventional ways. Wanna join them? That’s where microGranny comes into play.

Our monophonic granular sampler packs grand lo-fi sound into a small body. The 2nd generation of Bastl's instant classic reads wav samples from a microSD card and applies granular algorithms to them. With a vast collection of samples at your hands, you can do much more than simply trigger each one in turn. You can adjust start, end, sample rate (tuned or free run), crush, and envelope (attack release).

The minimal interface keeps things simple while offering many possible styles of playing. The microGranny complements your musical gear with no fuss – with MIDI Input, you can take complete external control of all parameters and transposition of the samples or play individual grains by different keys. You can play and hack the settings as much as you like, since over the past few years, we’ve majorly improved stability and so that it’s impossible to get the device stuck in any mode.

The Bastl microGranny has received raving reviews from the likes of Andrew Huang and many others. Sound on Sound's Paul Nagle says in his review that: "Maybe, like me, you've never anticipated the pleasures of a portable 8-bit sampler, but a brief exposure to Bastl Instruments' mini-marvel should sort that out."

You can build your own microGranny with our DIY kit. Go through the complete assembly guide below and make sure that you understand all the steps.

Are there any differences in software between Limited Editions?

Limited Edition Grannies were sold with different versions of software, as it was approaching its final version. Since the first version of MG2 came out, we have updated the software several times. The software gets better and better thanks to your feedback! Big thanks! <3

Anyway, it is possible to update your Atmega microcontroller with the newest arduino software posted on our GitHub. Still, we know that not all of the current MG2 users own a programmer, or can handle the update on their own. So you can get the preprogrammed chip with the newest firmware HERE. 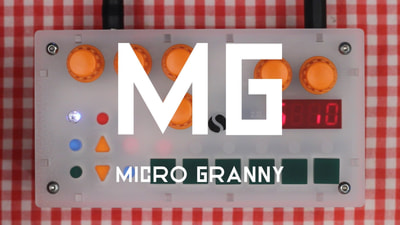